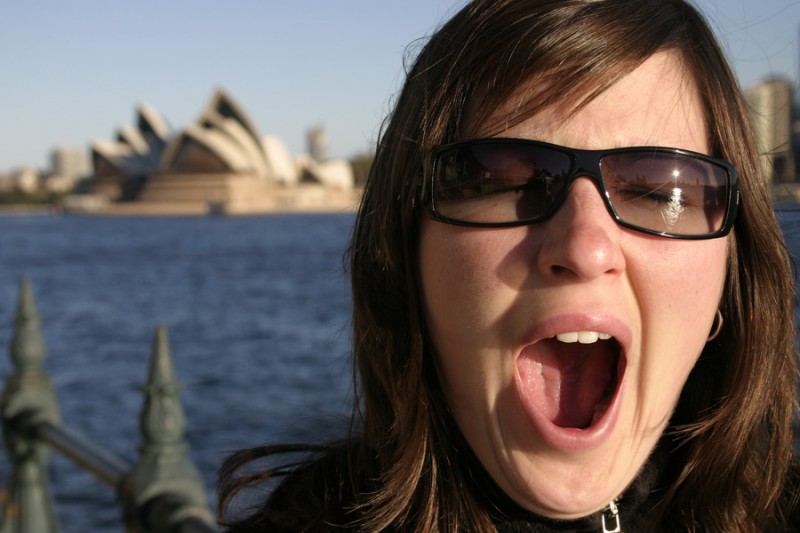 Sleepy yawning by the Opera House

Poor Aurelie. This picture was taken nearing the end of our first day in Sydney. We had been up since 3:00am to catch our flight and had walked all over the city (mostly due to my insistence to get as many photos as possible while the sun was out). The good weather lasted all weekend so that wasn't an issue but you can never be too sure! Aurelie was there with me the whole way and she never faltered (although she did become a little grumpy near the end). We slept like the dead our first night.

Yeah, it was a tough walking all week-end but it was worth though :)

Jason, to answer your question about any differences between ozzies and kiwis, yes there are differences that we could feel just being there a few days. We found the ozzies less open to foreigners than the kiwis and less friendly ... but it might just have been the 'big city' syndrom and it might be otherwise outside Sydney.

My team and I are actually going to Melbourne as an incentive week-end early Sep. I'll tell you my feelings about that.

As nice as it was, I could not live in Sydney ... too much of a modern Jungle :)

Poor Aurelie, Aaron you are an executioner.

It just Monday morning for me...just starting my day....and this picture makes me really sleepy again. Need a coffee!

Oh, this must be hard... I guess the you enjoyed your trip nonetheless!!

cool reflection in the glasses - why was your flight so god awfully early!?
is there a time diff from Auckland to Sydney?

Auélie - thanks for the description - tell us what you think of Melbourne!

Sydney is 2 hours behind Auckland. Our flight was at 6:00am (Auckland time) but since its considered to be an international flight we had to be at the airport 2 hours before.

Aurelie, you are a good sport to allow Aaron to post this picture. I agree with Kerstin in that it depicts real life & by sharing it with us we learned the story of your early flight. We know Aaron is grumpy when he is hungry & Aurelie is grumpy when she is tired. Avoiding situations where the two of you are both hungry & tired at the same time should be high on your relationship strengthening priority list.