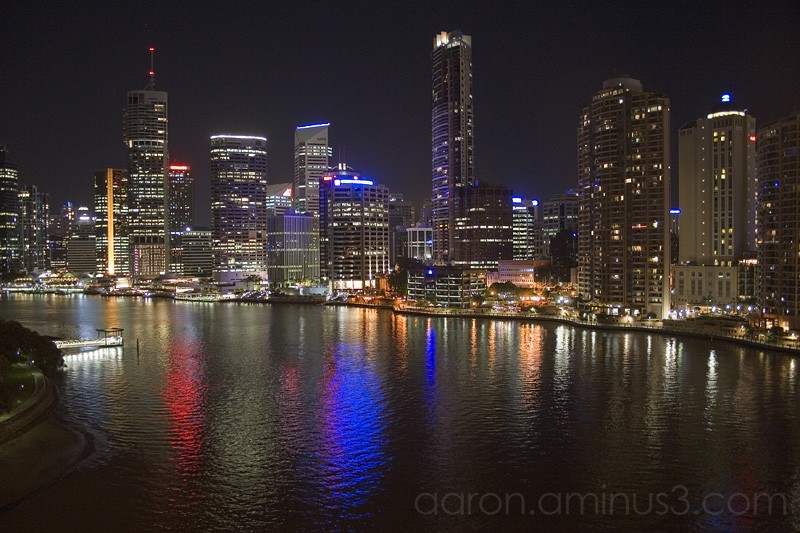 Taken from Brisbane's beautiful Story Bridge. I was forced to use high ISO and low F-stop because I had to balance my camera on the bridge itself which was not stable at all due to the constant traffic passing over it. I took about 20 shots and this one was the sharpest, and subsequently, the winner.

Brisbane is a really beautiful city. Home to about 1.4 million people, it's a relatively big city with plenty of space. Size-wise, it's a few steps up from Auckland and, I imagine, a nice place to live ... if one can overlook the threat of snakes and spiders and crocs and evil, laughing ostrich and giant, flying ravens that come out of the sky at vicious speed to steal pieces of your hair.

In spite of the challenge of taking this picture I will say that it looks as though it turned out fairly well. I am still having trouble taking cityscape nightshots for some reason, I understand the tech aspects but am still not sure why. Anyhow good job :)

i'm actually in the process of planning a trip to Brisbane. This photo only makes me what to visit right now!

@renee: Brisbane's a great city and it's located right between the Gold Coast and the Sunshine Coast both of which offer a variety of sun-related activities. Would highly recommend visiting the Australian Zoo and the city of Noosa is a beautiful beach town.

Great snap. Somehow I never am able to take good photos at night. Need to look into the tech aspects i guess.

nice one Aaron - you are a master at shooting without a tripod! I've been using mine less and less lately but it is still nice to have around the house when I get inspired to make macro shots from disgusting food items.

the colors on the water are superb

The light is excellent! Beautiful cityscape

Brisbane is my hometown and I can confirm that it is a fantastic place to live. It's so vibrant and the weather, although at times unbearably hot in summer, is fantastic. You've just succeeded in making me homesick!

For the record, I've only ever seen one red back spider and two dangerous snakes (not in captivity). I've never seen a crocodile outside of Australia Zoo or an emu in the wild! Australia is such a safe place to live.

@vic: Thanks for comment from the source. My remarks about the dangerous animals were more satirical than anything else. I've never felt in danger when I've visited Australia. =)

This is such a great shot. You captured a lot of detail and nice colors off of the water. Well done.

amazing photo. I believe the city is amazing too. I'm sorry that it stays on the other side of the world for a Portugal citizen.

I don't know what to say. The colors and water are breathtaking. WOW!

Beautiful night photography. I still have yet to learn this, since I use a H2 Sony, not a DSLR, so a bit more constrained. Also i just recently acquired a tripod, so i did shot a moon shot recently http://sheldonhull.aminus3.com/image/2006-12-28.html, i think i'm getting a bit of a hang of it, but have yet for one as epic as this!

@Sheldon Hull: Epic? Not sure about that. =) Your moon shot is nice. The trick with the moon is that you don't actually need a long exposure. Check out this shot where the exposure time is 1/400 second!

Yay! Brisbane is great! I should know, I live there! This is a fantastic shot of the city ... did you do the Bridge climb? I assume so, if this was where this was taken! :) I've been putting off doing the climb myself as I had heard that you weren't allowed to take your own camera up there ... I might do it now that it seems you can!

I love nighttime photography ... this is a stunning image ... beautifully captured ... terrific shot!

wonderful job here -- simply marvelous (and a great deal more superior than the views the postcards of the area afford, i might add!) :)

sorry to point this out but Brisbane has nearly 2 million people as of 2008 not 1.4, sikk pic but i walk this walk to get to work

That's the kind of picture i like :urban nights and great light