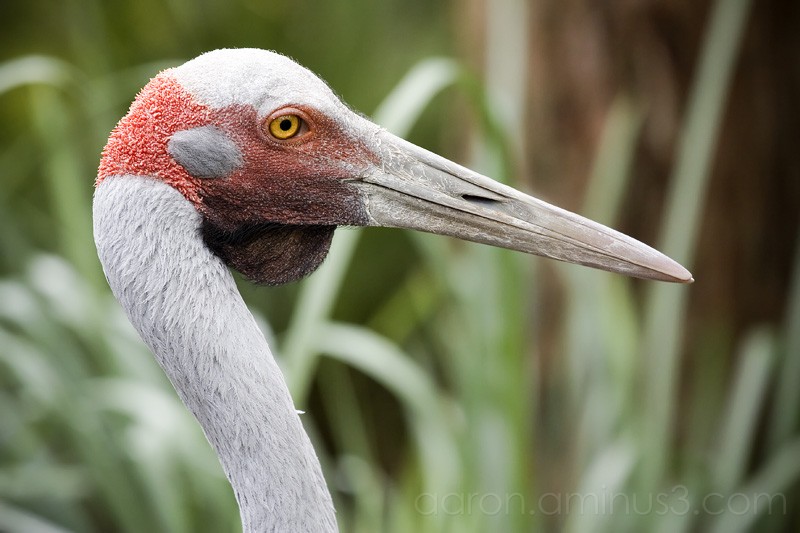 Bless my 20D and its attention to detail. If I had to give up my camera to save this bird's life it would be a tough decision for me.

Now you're probably thinking "Come on Aaron, you can always buy a new camera! That's just cruel..." But if the death was the result of a vicious fight with an aggressive male crane seeking sexual dominance in the flock, then I'm sure you wouldn't cast me as being morally unjust and you'd probably forgive me for wanting to capture it all in vivid 8MP detail with my beautiful Canon super snapping, animal cracking, digital go-boter.

Would you frown upon my behaviour if I dived into the fray with my wide-angle lens, capturing each violent blow, all the while hoping the blood didn't splatter too much on my lens? Would you cast your judgments upon me for my lack of respect for the glorious crane species or would you consider me noble for wanting to frame the last moments of this dear old crane's life? A life that was lived to the full and brought to swift end by a younger, more powerful, red-eyed rival.

It seemed more dramatic after I read the text! You have to capture the action. You can always tend to the dying birds later.

You see Aaron, your not looking at things right. Just think how morally unjust you would be to loose your 20D! Then pick the lesser of two evils (save the 20D at all costs)! LOL! :0)

Just shoot the photo and then see what happened, its a tough decision to make and I cannot judge you or anyone! Great photo of the crane, you capture the details very nice!

I'd say it is a wonderful capture Aaron - well done!

Have you thought of a career in writing?!
Cool photo

nice details in the capture!

Love this photo. What a beautiful crane species! Was this crane in a zoo or is such a majestic bird a common sighting in NZ? What's with all the drama in your comment? The crane seems very content & peaceful. The story of life in its true form is captivating enough without embellishment.

;) The camera wins in this case! intervention woud be disrupting natures way, the survival of the fittest and all that. At least thats what I'd tell myself so I could sleep at night ;)