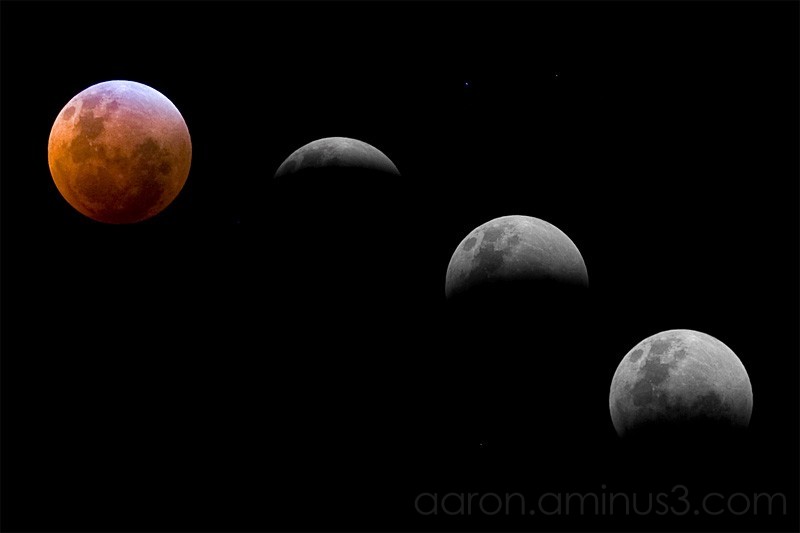 New Zealand had bright, clear skies for the total lunar eclipse last night so I setup my tripod and went to work. The idea for this composition was inspired by Jason's Total Lunar Eclipse of 2004. Notice the different orientation of the moon between his shot(s) and mine due to the different starting location on Earth (Northern versus Southern hemisphere).

Moving right to left, the first two shots were 1/400s F/8.0 ISO100, the 3rd shot was 1/100s F/8.0 ISO100 and the final eclipse shot was 1s F/4.0 ISO400. All images were captured at 200mm on a Canon 20D. On the final shot I could have decreased the ISO and increased the exposure time (to reduce digital noise), however the moon is a moving object and will blur if exposed for long enough so I wasn't willing to take any chances. IMHO, motion blue is far worse than digital noise.

For more moon shots: Portrait of the Moon & Space shuttle by the Moon

Fantastic shots! it was great to witness such a spectacular event.

This is so very very magical! I really enjoyed this!!

wonderful shots and thanks for sharing the EXIF info. Very neat composition

Striking! I was hoping someone would post pix of the eclipse; these are wonderful.

WOW very cool idea i'm so bummed I missed it :( have to wait 7 years now!

anyway, what lens did you use to get this close?

I like Astronomy! I like much your shot! It is well composed and with the perfect exposure!

Nice! Your presentation and detail is perfect. Your red moon is much sharper than mine. Well done!

Hey Aaron, this is really awesome. Do you have any other astronomical stuff to show?

this is just stunning

This is really nice. Having spent allot of time photographing the night sky I understand all the obstacles that get in the way of a beautiful photo like this one. The elliptical progression is very cool, almost 3 dimensional. Have you considered posting a higher resolution shot, of just the eclipse. If so I would love to see it also!

@Robert: High compliment coming from you. Many thanks.

Great shot. I agree about the blurring (expect in those rare photos where the blurring was intended to be expressive in some way or other) versus the digital noise. I was hesitant about setting the ISO too high on my camera but I prefer the noise even at 3200 ISO to a blurry image.

Excellent composition. I like that you chose monochrome for the first three phases of the eclipse with totality shown in color. Very nice.

Francesc B. from région parisienne, France

I envy you, you caught an eclipse ...

This image has been featured in 1 Remix collection.